How Attackers are Stealing Your Credentials with Mimikatz

Blog >How Attackers are Stealing Your Credentials with Mimikatz

Mimikatz is an open-source tool built to gather and exploit Windows credentials. Since its introduction in 2011 by author Benjamin Delpy, the attacks that Mimikatz is capable of have continued to grow. Also, the ways in which Mimikatz can be packaged and deployed have become even more creative and difficult to detect by security professionals. This has led to Mimikatz recently being tied to some of the most prevalent cyber attacks such as the Petya ransomware. Once Petya has established itself within an environment, it uses recompiled Mimikatz code to steal credentials and move laterally throughout the organization.

Using Mimikatz to harvest credentials as part of malware and cyberattacks is nothing new. Mimikatz has been linked to Samsam ransomware, Xdata ransomware, and WannaCry. The SANS Institute published a paper on detection and mitigation of Mimikatz early in 2016, but I’m not sure anybody is taking it as seriously as they should.

There are ways to protect against credential theft and abuse. The best place to start is with understanding the risks and the necessary steps to mitigate them. In this blog series, we will dive deeper into Mimikatz and look at how this open-source tool can be easily deployed as part of an attack. We will also explore various mitigations and ways that attackers are staying one step ahead of modern detection mechanisms.

What Exactly Does Mimikatz Do?

Mimikatz is primarily a post-exploitation tool, meaning it’s a way for an attacker who has found some other means onto your systems to expand their reach and eventually achieve complete control. Here are some of the ways Mimikatz can be used to do just that.

Mimikatz has a variety of ways that it can steal credentials from a system. One simple way is through using the sekurlsa::logonpasswords command, which will output password information for all currently and recently logged on users and computers. If an attacker can compromise a single machine, then they can use this to get the password information for any other users or computers that have logged onto that machine. This is the premise of lateral movement and privilege escalation.

You can see below by issuing this command, I can retrieve the NTLM hash for the account Jeff, which I can later use to impersonate that account. 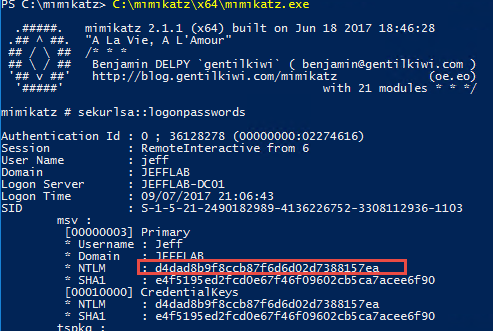 Another clever way of stealing credentials supported by Mimikatz is using DCSync, during which the attacker will pretend to be a domain controller and ask Active Directory to replicate its most sensitive password information.

Stealing credentials is the first step, the next step is to use them. Mimikatz comes with easy ways to perform pass-the-hash and pass-the-ticket activities to impersonate the stolen credentials and move laterally throughout an organization. Using the sekurlsa::pth command, I can take that recently discovered hash and launch a process on its behalf. Here is a post from a previous series, which covers this in more detail.

Once an attacker has successfully moved laterally to compromise a target domain, Mimikatz offers several ways to make sure they maintain their control even after detection. Golden Tickets and Silver Tickets provide effective ways to create forged Kerberos tickets that are very difficult to detect and provide attackers with unlimited access. Mimikatz also provides other powerful persistence techniques including the Skeleton Key, injecting a malicious SSP, and manipulating user passwords.

How Do Attackers Use Mimikatz?

Chances are, most attackers are not going to download Mimikatz straight from GitHub onto an infected computer and start using it. Most antivirus tools will detect that. In this series, we are going to take a look at how attackers can weaponize Mimikatz and what you can do to protect against these attacks. Here’s the lineup: